Where have all the buyers gone? 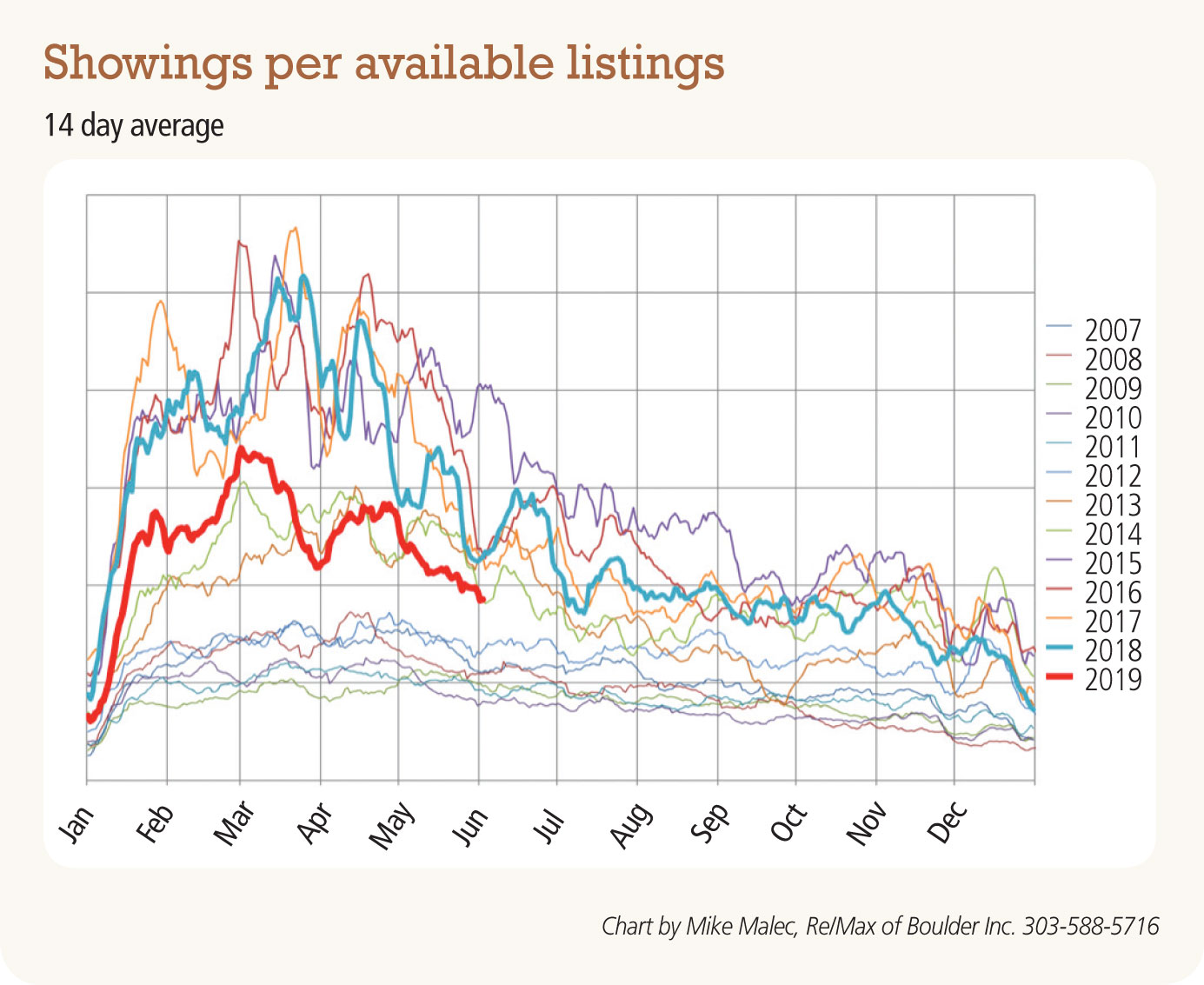 A well-functioning market consists of two sides: suppliers who offer a particular good for sale and consumers who purchase those goods.  In the Boulder Valley residential real estate market since 2012, there have been more consumers looking to buy homes than there were sellers offering homes for sale, which has led to a long appreciation period for homes.  Now, however, it appears that the number of buyers is dropping as is their willingness to pay ever-increasing prices.

First, how do we know that there are fewer buyers in the market?  The most direct measure of buyer activity that my company tracks (courtesy of Broker Associate Mike Malec) is the number of showings per available listing.  From examining the data, it is fairly easy to see that this year’s showing activity is markedly below the recent boom years, but is still above the levels present during the recession.

Second, to further substantiate this decline in buyer activity, we can look at more indirect measures, such as average sales prices, available inventory of homes on the market, and average time a home will be on the market before sale.  Each of these markers indicates a decline in buyer activity.  Through May of this year, the average price of a single-family home in Boulder has fallen 0.6 percent, while the average attached unit has fallen 4 percent, compared to the same timeframe last year.  This indicates that there are fewer buyers competing for available homes to the point where home appreciation rates have stalled.  At the same time, the amount of homes available on the market has increased nearly 20 percent for single-family homes and almost 50 percent for attached ones, while the average time on the market for single family homes has gone up 5 percent and nearly 20 percent for attached ones.  These statistics indicate that those buyers in the market are becoming choosier and are able to take their time making decisions.

It does not appear that our local economic conditions explain the drop in buyer activity.  According to the State Demographer’s office, people are continuing to move into Boulder and Broomfield counties, albeit at a slower rate than previous years (though the city of Boulder has seen its population declining in the last two years).  And local unemployment levels continue to be historically low.

Economic conditions at the national level are softening, to the point where the Fed is discussing interest rate cuts, so these conditions may play some role.  But, interest rates are actually about half a percent lower than they were at this time last year, which would appear to weaken that argument.

Could it be the weather?

Another possible explanation I’ve heard is that our unusually cold and snow winter could have suppressed buyer demand as people were less willing to trudge through the snow to go see houses.  While this is plausible, all else being equal, we would have expected to see that pent up demand being released as the weather improves, but we just have not seen that play out in the data yet.

Whatever the cause of the decline in buyer activity may be, local real estate legend Larry Kendall of the Group Inc. Real Estate in Fort Collins always says that buyers are the smartest people in the market, so they may be acting as the proverbial canary in a coal mine, meaning that they could be a leading indicator that our market is shifting from a seller’s market to either a balanced or buyer’s market.  If you are a seller, be wary of pricing above the market in these shifting conditions.

Related Articles
Articles Insights from the Marshall Fire, effect on real estate The Marshall fire that tore through Boulder County, Superior, and Louisville on Dec. 30, 2021, was the most destructive fire in Colorado history and left a gaping hole in our community that will take years to fully recover. While we are still early in the recovery process, there are some initial insights that we can […]
Articles The changing definition of ‘luxury’ in Boulder Valley homes As one reflects on the real estate market performance in the first three quarters of 2021, it is easy to recall that, in the not too-distant past in Boulder Valley, a “$1 million home” was nearly synonymous with a mansion: a large, stately home with very high-end finishes on a large lot, possibly with breathtaking […]
Articles Why are home prices so high and will they come back down? Let’s be honest, home prices in the Boulder Valley are high, like insanely high, so why are they not likely to fall (much)? Before we examine why high home prices are likely here to stay, it is helpful to quickly examine just how expensive the homes are here in Boulder Valley. High Prices Everywhere Any […]