Economic Growth Marches on in Boulder County, but Headwinds Building 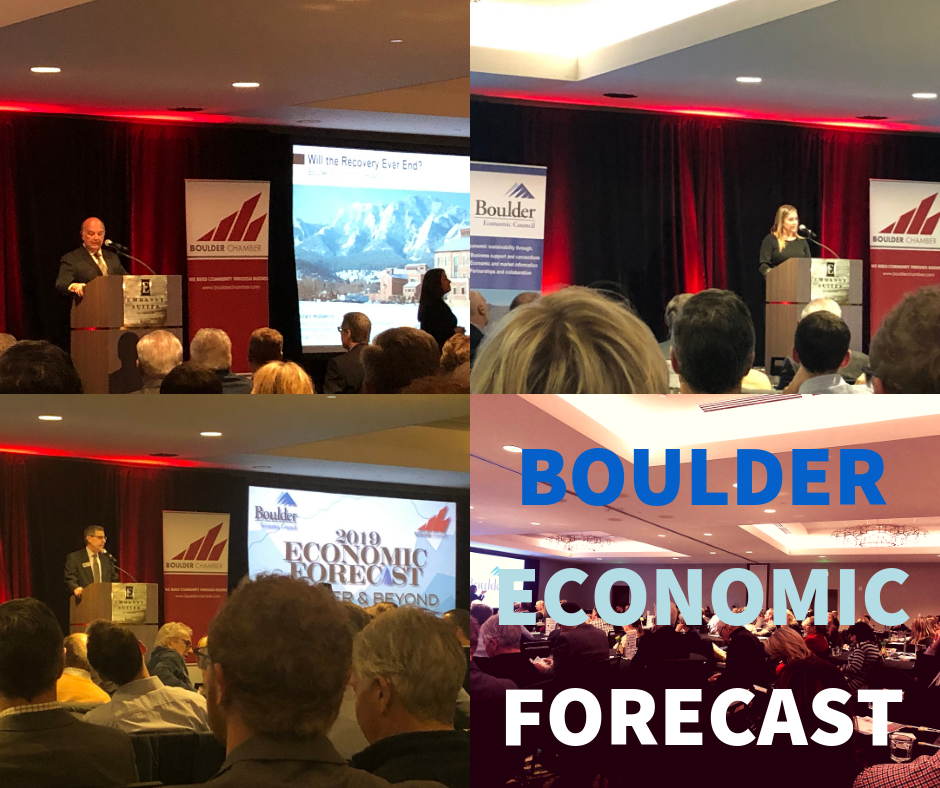 Boulder’s economic horizon will keep its rosy glow, though economists anticipate the pace will slow in the face of growing local and national challenges.

Nationally recognized experts presented a mixed economic message to a record-setting crowd of civic, political and business leaders gathered for the 12th annual Boulder Economic Forecast. Organized by the Boulder Chamber and Boulder Economic Council, the event was held January 17 at the Embassy Suites Hotel. RE/MAX of Boulder is among the event’s sponsors.

The goal is to arm community leaders with up-to-date statistics and trends that inform decisions and support local economic vitality, according to John Tayer, CEO and President of the Boulder Chamber.

And community leaders will want to take heed.

“Overall the picture is pretty positive in the sense that consumption is growing, investment is growing, government spending has been growing, so you have those pieces pushing the economy forward. That continues to fuel growth and employment,” says Wobbekind.

But uphill pressures are mounting.

With national GDP growth slowing to a projected 2.4-2.5 percent for 2019, the national economy is moving to a moderate trend. Wobbekind says the thing on everyone’s mind – “the elephant in the room”—is whether recent stock market volatility and other factors will lead to a significant downturn in the economy.

“Will the Recovery Ever End?” is his presentation title. But Wobbekind says it’s hard to say whether or not the economy will turn towards recession.

On the good news side, Wobbekind says nationally incomes are rising due to strong employment accompanied by strong wages. With rising incomes, consumption rates are growing and debt burden as a percentage of income is relatively low. National FHFA home price growth is showing strong price appreciation.

Then there are the tempered aspects of the national economy. He says consumer confidence is still quite high, historically speaking, but it has come down slightly. Businesses are in good shape, but there is uncertainty about interest rates, trade agreements, sales and profit growth and hiring. Nationally, business confidence is falling, but still above neutral.

Wobbekind also presents some straight-up challenges. Corporate and private tax cuts are effectively ending, with the tax cut stimulus leaving a national deficit of over $1 trillion, accumulated during a prolonged period of economic expansion. Workers are in short supply with low unemployment rates and 6.7 million jobs unfilled nationwide. Student loan debt is high and interest rates may see modest increases.

Colorado’s economic record has been strong, outperforming the nation in recent years. For example, the state ranked third in the country for pace of GDP growth in 2017. Wobbekind suggests the trend may keep going, though more slowly.

But worker’s wage growth is not as strong as would be expected given the tight labor market. Wobbekind notes lackluster increase in wages is troubling in the face of the high cost of housing and inflation.

While Colorado’s population keeps growing, the rate is slowing. Net migration will continue to decline as it did last year.

Home price appreciation—notably among the fastest growing in the U.S for the past 10 years—fell from the top three slots but remains in the top 10. Residential building permit activity is still strong.

While businesses are still confident in state and local economies, confidence is dropping when it comes to the national economy.

Boulder County is expected to mostly hold steady. Though the area’s strong rate of growth is expected to decrease next year, the decline will be slight. Key statistics Wobbekind listed are:

Boulder’s GDP growth is 4 percent
Much needed multifamily housing stock is increasing
City of Boulder’s median single family home prices have stabilized somewhat
City of Boulder has a significant jump in office vacancies and more office space is coming online
Boulder County wage growth is 4.7 percent
Broomfield and Denver have higher wages than Boulder
City of Boulder’s sales and use tax dipped last year but is climbing back up

Wobbekind points to headwinds facing Colorado, saying the state should watch out for:

Skillful Colorado’s Executive Director, Shannon Block, dove into to strategies for overcoming the shortage of skilled workers. Employers are struggling to find workers and the cause of the talent shortage is a skills gap. Fueling the problem, says Block, are traditional employment practices narrowly focused on candidates with 4-year college degrees. That focus is making job-landing difficult for the 70 percent of Americans who don’t have a 4-year degree.

Skillful Colorado’s focus is to shift that trend toward hiring practices that value skills-based talent. The goal is to help Coloradans get jobs in a rapidly changing economy, particularly the 60 percent In Colorado with no college degree.