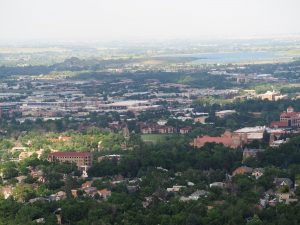 The Boulder Valley real estate market has undergone a shift in 2017.  While we began the year in a fairly strong seller’s market, it soon became apparent that the indicators we track were pointing to a shift toward a more balanced market.

Making predictions is always a risky business, but here are my top three predictions for 2018 and what they will likely mean for people in the market.

1. Appreciation will continue (but at a slower pace).

While the Boulder area continues to top the country in total appreciation since 1991 (a whopping 371 percent), we have fallen out of the top 10 — to number 19 — nationally in terms of one-year appreciation (10.84 percent according to FHFA). Nevertheless, many structural factors point to increased upward pressure on home values (including low unemployment, strong net migration, and lack of lots to build upon).

For attached homes (townhouses and condos), Boulder County experienced a meager 1.7 percent improvement through the third quarter of 2017. This number is somewhat misleading, as most areas were up by a higher percentage while the City of Boulder was actually down 3.7 percent.

For 2018, I predict that attached homes will appreciate by about 5 percent, with appreciation being higher in every locale except the City of Boulder. In Boulder, it is possible that we will see a continued decline in prices, especially if investment property owners who have not brought their units up to Smartregs compliance decide to sell rather than spend the money to them into compliance.

What this means: For buyers, now is a great time to buy, especially if you are in the market for a condo in the City of Boulder.  Waiting will cost you, but not as much as in previous years.  For homeowners, if you are considering selling, you have ridden a strong wave of appreciation over the last several years, and you will not likely see the same rate of appreciation by continuing to hold.

Since 2011, the inventory of available homes on the market has generally gone down when compared to the preceding year. That trend finally broke in 2017, with available inventory of both single family and attached homes rising above 2016 numbers. Without getting too deeply into the weeds, a number of indicators that we use to track the market point to a continuation of this trend in 2018.  Some of the more telling indicators are (1) a falling sales price to list price ratio, (2) an increase in months of inventory, and (3) more expired listings (homes that did not sell on the market).

In the City of Boulder, on the single family side, I predict that inventory will see the biggest increase in the $1 million+ market as a gap has started to open between sellers’ opinions of their homes’ values and what buyers are willing to pay for them. On the attached side, we will likely see an increase as well, partly due to an influx of non-Smartreg-compliant units as well as condos at the Peloton being converted from apartments.

What this means: For buyers, you will finally have more homes to choose from in your search. For sellers, you will have to be much more careful when pricing your home to avoid being rejected by the market.

For the past several years, numerous experts have predicted mortgage interest rate increases. And for as many years, the rate increases have been non-existent or far more modest than predicted, even after the Fed increased its Fed Funds Rate. Speaking of which, the Fed is expected to raise rates again this month as the economy shows continued signs of recovery. However, the number and size of interest rate increases in 2018 is far from certain because of a change in leadership of the Fed.

Lawrence Yun, the chief economist for the National Association of Realtors, predicts that rates will increase to 4.5 percent by the end of 2018, which is about 0.5 percent higher than current rates. This figure could be affected by tax reform, the country’s economic performance, and other political factors. Nevertheless, for planning purposes, an increase to 4.5 percent in 2018 is likely to be in the ballpark.

Conclusion: Sellers have been the primary beneficiaries of the real estate market since the recovery of the Great Recession, but 2018 will finally see buyers in a stronger position.